chanreborn博客主頁 IS IT A TURNING POINT OF THE SEASON ?

Most Gooners were apprehensive about Sunday's derby. A few thought Arsenal would win, many would have taken a 1-1.

But the score was Arsenal 5 Spurs 2.

Five goals, three points, fourth place, above Chelsea on goal difference. The atmosphere at 3-2 was white-hot.

We know that football is unpredictable.

Where did Arsenal's five goals come from? Where did Tottenham’s collapse come from?

But how did Arsenal score five goals after not scoring at all against Sunderland or Milan?

My pet theory has been modified : Every football match contains the previous match, unless it's a North London derby.

The Saha goal, the Ade penalty?

Gooners feared an early goal and here it was, a typical HarrySpurs attack, a big fast zigzag move, Adebayor drew Koscielny wide on the left, Saha was always going to shoot with his left foot, waited for the Ade's crossfield pass to reach him, Gibbs was asleep, not doing his job, not covering until it was far too late, Saha's shot flicked off Vermaelen’s heel, looped over Szczesny.

That quick break opened up Arsenal’s dodgy defence with alarming ease. But Van Persie hit a tremendous shot that deflected off Kaboul and went wide. Friedel tipped over a Rosicky header, Szczesny saved at the feet of Adebayor, Walker hit a rebound over the bar, Rosicky and Benayoun, surprise ｓ ｅｌｅｃｔions, were linking well, looking to earn new contracts.

Then Modric hit a defence-splitting pass into Gareth Bale’s explosive run and Bale dived over the keeper’s arm.

But Bale, a notorious diver, conned Mike Dean and Ade made it 2-0 from the spot.

The Spurs method is all about how you use pace, how you support pace, when you sprint, where you sprint. But it's often helter-skelter, depending on momentum as much as a finessed final ball.

When Walcott nudged a ball to Van Persie, his shot hit the post. But when Walcott broke away in 36 he had no confidence, passing too early to RVP, who was surrounded. Why didn’t Walcott draw a defender towards him? He bottled it, passed the buck.

Then Sagna scored his first goal in a home game for Arsenal with a header from Arteta’s left foot cross in 42. Sagna’s always been good in the air and diver Bale, the nearest Spurs player, just stood and gawped as Sagna pulled a goal back.

It might have been 3-1 but for strategic foul by Arteta on the breaking Bale, who was threatening to slice Arsenal open again. Arteta knew the ref would book him but it was worth it.

The goal for 2-2 a minute later was a self-made strike by Van Persie, who sent a wicked left foot shot into the corner for his 29th goal in all comps.

By then, Spurs had lost, had realised Arsenal were better, able to move the ball too quickly for them.

Sky pundit Glenn Hoddle said, “For me, it’s not a penalty.”

Phoning from the stadium, my mate Kelvin said, “I can't believe how bad Walcott is. Worst I’ve ever seen him.”

Second half, Harry bottled it. He used two subs at half-time to tighten the game up, That didn't work and he had removed all his attacking threat. Madness!

He took off Saha and brought on Van der Vaart, who can't run and was invisible. And he replaced Kranjcar with the belligerent Sandro.

Vermaelen won the ball, to Song, to Gibbs, back to Song to van Persie, crossfield to Rosicky, to Sagna on the overlap. Rosicky played it wide to Sagna, then nicked onto the cross to score at the near post. His first goal in 50 Premier League games.

After two years without a goal, Rosicky was the best player in the pitch.

Football is unpredictable- that’s why we love it.

In 57, Walcott fired just past the post, a decent effort. He hasn’t scored a home league goal since December 2010. Thanks Martin, for that stat.

Arsenal broke upfield via Van Persie, who had Walcott 70 yards behind him. Walcott twigged eventually and started to run for RVP's pass, miscontrolled the ball, then scored with a dink over the keeper.

But some paranoid Gooners were thinking : We’ve been here before.

Then Song found Walcott with a great pass and Friedel didn’t come out, making it easy for Walcott to shoot across him for 5-2. This time his control and execution were exemplary.

At 5-2, the fans sang,"Harry for England!" but in a teasing way, not a malicious way.

So Arsenal won by three goals to jump above Chelsea into fourth. They beat Spurs and Chelsea on the same day. Super Sundays don't come much better than that.

On his own, Adebayor is useless and the second half proved that.

His value is running fast to keep up with Bale or Saha, giving the ball to them, or getting it from them. That’s all he can do. He hides,falls over, grins, walks, hides again. Second half, Adebayor didn’t want the ball.

Scott Parker was sent off, second yellow, misses Man United game next week. Gervinho got five minutes, coming on for Benayoun. Second half, Bale never had a kick and did nothing in defence Modric, with no runners to hit, just vanished as belief drained from Spurs.

"We buckled, and that's not like us," said Harry.

Truth was, Ledley King could not cope with such a lively attack, Assou-Ekotto had a nightmare, and the whole Spurs team folded under pressure.

Experienced pros Rosicky, Benayoun and Arteta kept Arsenal in the game in the first half, after they lost one goal to a fluke and another to a dive.

Spurs led 2-0 but they never controlled the game at any stage, so it pendulumed nback to 2-2. Nico Kranjcar was a passenger, Harry realised he'd picked the wrong team but they imploded after his changes.

The fighting comeback of Arsenal was almost as remarkable as the implosion of Spurs.

Could be a big turning point for both clubs.

Next week Arsenal are at Anfield, while Spurs play Manchester United without Scott Parker.

There are no top class defenders any more.

You’ll have noticed that all the great defenders became pundits.

On the BBC, Alan Hansen and Mark Lawrenson say : You can't defend like that. Martin Keown and Lee Dixon always tell us that defenders aren't doing it right.They are correct!

Happy anniversary to you and Little Bee! 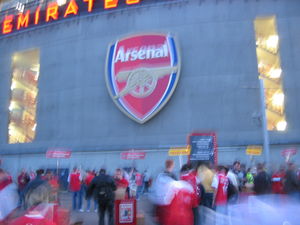 The key player in the Nou Camp will be Szczesny.

So pray that nothing happens to Arsenal’s goalkeeper between now and Tuesday, March 8th.

Barcelona’s style is cleverly-timed runs onto sharp little passes, which ｃ ｒｅａｔｅs a lot of one-on-one chances with the keeper.

Wojciech Szczesny’s fine positional judgement makes him a master of making opponents shoot into the side-netting or just past the post.

On the goal, he was a bit unlucky because David Villa, a razor finisher in these situations, slotted between his legs.

By contrast, he got lucky on the loose ball after his save, when the scrambling Messi headed in but was flagged offside. Messi wasn't offside.

For me, Szczesny was Arsenal’s best player last night for that reason. Making Messi miss was the name of the game.

Yes, Koscielny played his finest game in an Arsenal shirt.

Yes, Jack Wilshere played with remarkable authority at the heart of the team. England need to play Jack football, Fabio - not Capello football.

Yes, of course, CL knock-out ties are a game of four halves.

Arsenal lost the first half 1-0 and won the second half 2-0 and halves three and four will roll round 20 days from now.

Arsenal raised their tempo after half-time and the game turned on 68 when Keita and Arshavin came on.

Keita replaced Villa to stiffen Barca's midfield, which was running out of steam, and allowed young Busquets to go ball-hunting further up the field.

Arshavin’s arrival (for Song) allowed him to link in a cool manner with Clichy, who played a killer ball forward into the box with his right-foot and gave Van Persie a chance to hit a mighty left-foot shot on the half- volley inside the near post of Victor Valdes for 1-1.

Valdes has always had flaky moments. That blunder by allowed Arsenal back into a game that Barcelona were still playing mostly in Arsenal's half.

Still, defending deeper can be good. You can only counter-attack if your opponents are in your half of the field. You can attack too much in a game. If you attack less, you often score more.

Frankly, Fabregas, Eboue and Walcott had been crap.

All three played crap. Only a blinkered, badge-kissing nincompoop would say any of those three played well last night.

Arsenal had nothing on the right flank but now, suddenly, that was where the winning goal came from after a fabulous move.

The cool Koscielny picked up the ball in his penalty area, passed to Bendtner, who passed infield to Wilshere, then quickly forward to Fabregas, who instantly released Nasri with a superb ball down the right flank.

Nasri could have tried the obvious with a low cross to the far post but chose instead to play a lovely pass which allowed Arshavin to curl his sidefoot shot behind Abidal and into the net from 15 yards.

That quality goal gave Arsenal their first victory against Barcelona and it set the seal on the pulsating, rocking, thrilling night that the Emirates has needed since 2006.

Sporting Gijon was a factor last night because game was much harder than the Wolves game was for Arsenal .

After two and half years of staggering success, and intensifying pressure, Barcelona are showing signs of burn-out, so Pep has to husband his resources very carefully.

Coming back off an international break, which is mostly where Barcelona ｄ ｒｏｐ their points, he conceded an early goal at Gijon in a game that was very passionate, intense and physical, since Gijon are fighting for their lives just above the drop-zone.

I was really enjoying the game but as the second half went on I was thinking : This is taking a lot out of Barcelona !

Indeed, it was a helluva battle that was taking a lot out of both sides.

Just as the commentators began to say that David Villa was about to be taken off, he glided onto a wonder-pass from Messi and chipped the keeper from the edge of the box and it finished 1-1.

The more games you win, the more the pressure is on you. To handle that you need character and guts. Wilshere and Szczesny have given the team a lot more personality and authority than it had last year.

As Rufus Thomas said, age ain’t nothin’ but a number.

Man of the match: Szczesny.